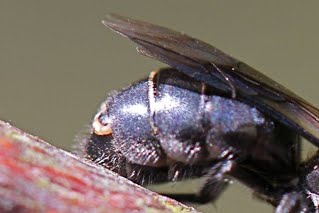 The Strepsiptera parasitise silverfish, cockroaches, mantids, orthopterans, wasps and bees, and flies, although they are mainly found on Hymenoptera and the Auchenorrhyncha Hemipterans. When an insect has been infected by a strepsiptera it is called “stylopisation”.  There is one listed undescribed (genus and species) of Strepsiptera.  Females are always within the host, where as the males have wings and can fly freely. The female buries herself between the metasomal terga.  Males are winged.