Adult Louse flies feed on the blood of birds and mammals. They have a flattened form and thick out-stretched legs which allow them to cling closely and strongly to their host. Some are wingless and strongly resemble lice and ticks. The larvae develop one by one within a female by feeding on special milk glands and are deposited when they are ready to pupate.

Tasmania has 9 species in five genera. The bulk of these belong in Ornithomya (4) and Ortholfersia (2). Ornithomya, Orthinoica and Ornithopila are parasites of birds. Ortholfersia are found on wallabies and pademelons. The somewhat widespread Melophagus ovinus is the only wingless species here and is associated with sheep. 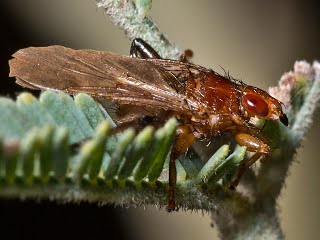