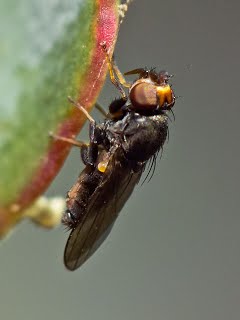 Milichiidae attract the common name of ‘free-loader’ flies due to the well known kleptoparasitic feeding habit of adult females of some species. Typically such adults will be found hanging around, or even on, a ‘host’ spider, or other large predatory invertebrate such as from Reduviidae, Asilidae etc, where they readily feed on captured prey already injured from the feeding process of the much larger predator. However similar fly food thieves are found in other families including, but not restricted to, Ceratopogonidae, Empididae, Lonchaeidae, and Chloropidae. Of these, the free-loader flies from Chloropidae, being largely drab, small and broadly ovate species from subfamily Oscinellinae, are most similar to Milichiidae and can easily be confused with this family. The Oscinellinae can be distinguished by the reduced major bristling on the head and mesonotum, and in some having short hairing on the eyes, whereas for Milichiidae the head orbital bristles are typically strong, or differentiated, the mesonotum with long, semi-erect major bristles posteriorly (in front of scutellum), and the eyes always bare.

Adults of Milichiidae are also known to feed on flower nectar and Sternorrhyncha ‘honeydew’ (eg from aphids). Conspecific males of free-loader females do not exhibit the same kleptoparasitism but occasionally are found close to, or even in copula on, the ‘host’ or host’s prey. Milichiidae larvae are mostly saprophagous with records including a variety of manures, decaying plant materials and animal carcasses. Some are ‘ant-loving’, where they live on the composting detritus within ant nests. 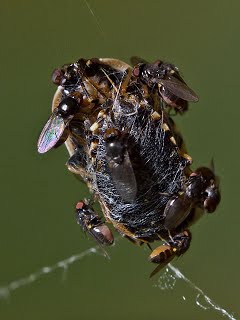