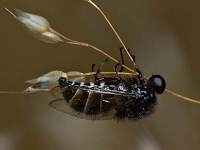 Acrocerids are strange looking small-headed flies with humped thorax. Some adults feed on flower nectar, however others, such as Ogcodes spp., have reduced mouths and are not known to feed. All acrocerid larvae are internal parasites of spiders.

Female small-headed flies often lay hundreds of eggs or more in one area, usually prefering to do so on dead plant twigs though sometimes man-made substrates such as clothes lines are chosen instead. Immediately after hatching, the larvae are very mobile and seek out a suitable host – this will be an unlucky spider passing by. They typically enter the body by ‘breaching’ the abdominal tegument. Though the spider remains alive for some time while the larva, or larvae, feeds internally it is eventually killed, usually during the spider’s penultimate stage just before final maturity. The larvae will then pupate.

Tasmania has 11 known acrocerid species – Ogcodes with 9 species, and Panops and Pterodontia both with one. Panops can be distinguished from the other two genera by their longer antennae, being at least as long as their head, and their well developed proboscis. Ogcodes differs from Pterodontia by having bare eyes and many weakly developed wing veins. In Pterodontia the eyes are densely hairy and all wing veins are equally strong. 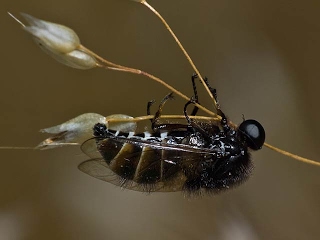 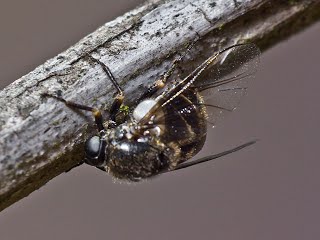 Schlinger, E. I. 1960. A revision of the genus Ogcodes Latreille with particular reference to species of the western hemisphere. Proceedings of the United States National Museum 111: 227-336.