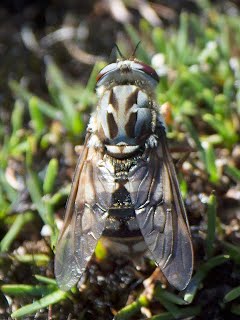 Pelecorhynchus montanus and P. occidens are very similar species. Both have wings unspotted, thorax slate-grey with two incomplete longitudinal dark brown lines that are interrupted briefly by a pale elongate spot on the suture, and abodmen with three pale bands that are narrowly interruped down the middle. The brown thoracic stripes of P. montanus have the internal border edges distinctively ‘shaped’, leaving the lines widened where they shape inwards, whereas for P. occidens the inner edges are much straighter, leaving the stripes with a more consistent, and thinner, width. Another important distinction between the two species is that on the scutum for P. occidens there always occurs a short, somewhat triangular, brown medial mark lying in front of the scutellum, but P. montanus lacks any such mark there. Bodylength around 16mm. 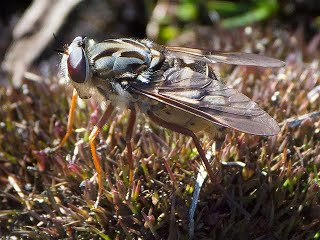