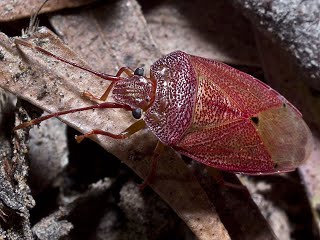 Amphaces is typically ovate, with one species elongate-ovate (A. elongata). The lateral margins of the pronotum are depressed anteriorly, being narrowly laminate there and the first antennal segment generally long, distinctly extending well beyond the front margin of the head. The body and head dorsally generally covered with dark punctures. The head in front is generally arcuate, with the rounded juga (cheeks) and anteclypeus (middle segment) ending anteriorly in line. Antennae 5-segmented and body length always above 8mm.

In comparing other Tasmanian genera, Eupolemus, Stauralia, Anischys and Galgacus are also ovate in outline. Eupolemus species, excepting E. virescens, are smaller (not above 8mm in length) and have first antennal segments shorter, not extending distinctly beyond anterior margin of head. E. virescens is a larger species that agrees with Amphaces generally, and with an elongate-ovate body similar to A. elongata, though it differs from all described Amphaces species (and other Eupolemus species) by the antennae hairing which is longish and sparse on segments two to three, but very short and thick on segments four to five. Stauralia lack the very thin lateral pronotal margins, the head not rounded in front of the eyes, being with straight margins laterally, and the head also lacking dark punctures. Anischys have species smaller in length, the lateral margins of the pronotum more widely laminate, and the last two antennal segments incrassate (semi-clavate). Galgacus has only the one species which, in habitus, differs greatly from all other Tasmanian acanthosomatids. 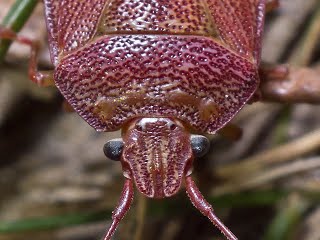 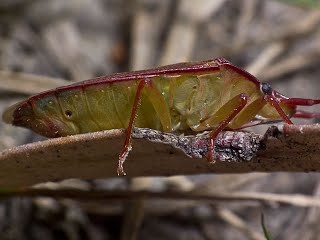 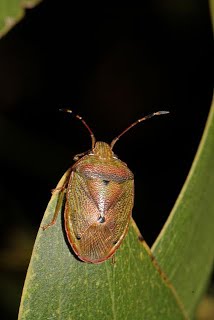 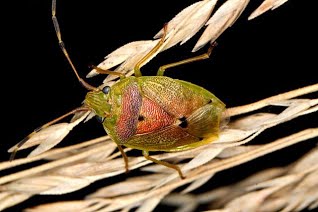 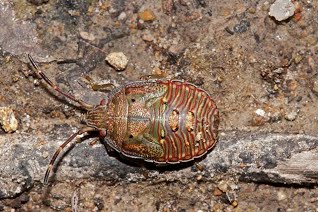 cf. Amphaces, male – we’re not sure if the large posterior lateral projections of the genital capsule seen here might preclude this bug from belonging in Amphaces?
Early February 2018
The Big Bend Track
Mount Wellington, kunanyi
On Eucalyptus. 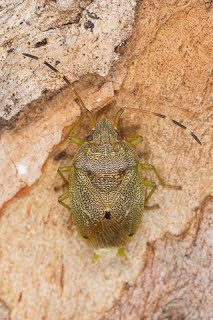 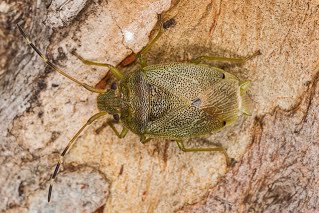