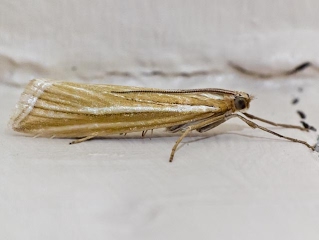 Of the Tasmanian species, Hednota opulentellus is most similar to H. panselenella with both species having the lower branches of the medial white streak thin and somewhat ill-defined. The former differs from the latter by eyes being lined above by pale scales, forelegs distinctly darker than mid and hind legs, and labial palps with whitish scales beneath at base. H. panselenella has only a pale spot lining the eyes in front, all legs dark (except hind tibiae pale above), and the labial palps without white scales. H. grammellus is also similar but differing by the lower branches of the medial white streak much more defined and thicker, being narrowly separated by ochreous lines, the head white but with an ochreous medial line above, all legs whitish-ochreous, and the labial palps lined on inner margins and beneath with white scales.

Hednota nr. opulentellus – not placed here with confidence but appears closest to this species.

Late February 2013
Franklin
Note this moth has both labial palps missing – like the other species these would be much longer than the head and forward directed. 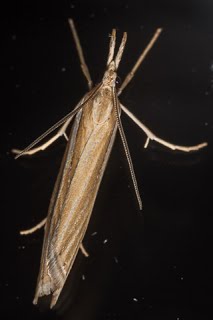 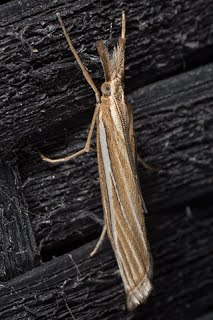