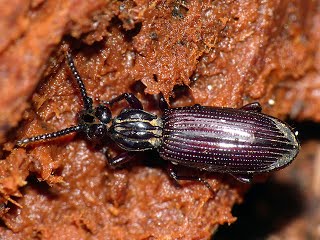 There is argument that Rhysodidae should be included in the carabid beetles.  This is supported by Lawrence and Slipinski (2013).   For the sake of consistency we have kept in line with the Australian Faunal Directory (last checked 20/6/21). Adults and larvae live in rotting wood and feed on slime molds.  Tasmania has only two listed species of Rhysodidae.