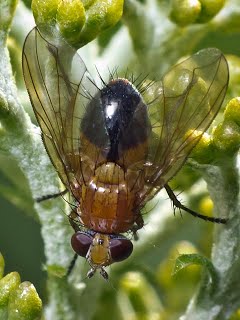 cf. Semisuturia – we are not entirely sure if the fly below belongs here but is temporily placed under this genus because of the closeness in characters, chiefly colouring and the form of the abdomen (read description below).

Semisuturia have the abdominal tergites with sutures largely obliterated dorsally, giving them a fused appearance there. The species are chiefly orange in colour and of a generally small size for tachinids (around 4-7mm). The below record of this genus from Tasmania is unusual as the described Australian species are mostly recorded from Queensland, with NSW records being the most southerly officially. On external characters, the closest described species to the fly presented here is S. flavifrons. Following Malloch’s key and associated notes (1930, PLSNSW v. 55, pp. 340-342) S. flavifrons differs only by having more distinctive anterior dorsal whitish vittae on the thorax and being larger at around 6.5mm. 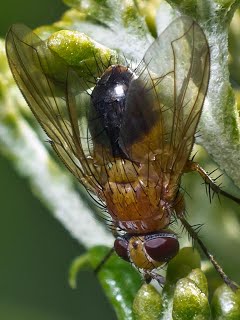